Research on the characteristics and application progress of sodium caseinate

Sodium Caseinate (SC), also known as sodium caseinate, sodium caseinate or sodium casein, has a strong emulsification and thickening effect. It is commonly used in the food industry to increase the fat and water content in food Retention helps to distribute the ingredients evenly in food processing. Sodium caseinate is an addition compound of casein and sodium. It is a kind of protein affinity obtained by treating casein curd with alkali (such as hydroxide) to convert water-insoluble casein into a soluble form. Water food glue. As a food additive, sodium caseinate has high safety. In 1970, the 14th meeting of the FAO/WHO Joint Food Additives Expert Committee believed that sodium caseinate prepared with food-grade reagents according to good processing operations can be regarded as food and does not need to be provided. Its toxicological data, the allowable daily intake (ADI) does not require special regulations, and it is widely used in countries all over the world. Because of its good emulsification and thickening effects, it is applied to almost all foods. It is currently produced in countries around the world And consumption are increasing day by day.

Sodium caseinate is white to light yellow powder or flakes, odorless, tasteless or slightly specific aroma and taste, and is easily soluble or dispersed in water. PH is neutral. The casein precipitates after adding acid to the aqueous solution. Sodium caseinate is a soluble salt that often uses fresh milk as a raw material and uses alkaline substances to convert water-insoluble casein into a soluble salt. The raw casein is prepared by rennet or acid precipitation method. After dehydration (containing 50% to 60% moisture) or casein is dispersed and swelled in water, sodium hydroxide, sodium carbonate or sodium bicarbonate is added After the aqueous solution is neutralized, it is obtained by evaporation, spray drying or freeze drying. It can also be neutralized with ammonium, calcium, magnesium, potassium and other alkalis to make various caseinates.

Sodium caseinate has good foaming properties and can be widely used in ice cream and other cold foods to improve its texture and taste. The study on the foamability of sodium caseinate, whey protein and egg white powder found that when the concentration is in the range of 0.5% to 0.8% under the same conditions, the foaming power of sodium caseinate is the largest, and its foaming Bubble power increases with increasing concentration. However, its foam stability is not as good as egg white powder. The presence of sodium and calcium ions can reduce its foaming power, but can increase its foam stability.

As a food additive, sodium caseinate is mainly used as an emulsifier and stabilizer. It has strong emulsification and thickening effects. In fact, it also has the effects of thickening, bonding, foaming, and foam retention. Because sodium caseinate is water-soluble, its use in food is broader than casein.

Sodium caseinate is widely used in the food industry. It can be used in ice cream, protein drinks, meat and aquatic meat products, biscuits, bread, noodles and other cereal products, coffee mates, fast food and other foods. The amount used in the sausage is 0.2-0.5%, which can make the fat distribution uniform and enhance the cohesiveness of the meat; used for fish cakes can enhance the elasticity; add 0.2-0.3% to the ice cream to stabilize the bubbles in the product and prevent sand and sand Shrinkage. Other food usage: 0.2-0.5% for bread, biscuits and noodles; 0.5-5.0% for western-style cakes, doughnuts and chocolate; 0.2-0.3% for creamy milk beverages

Because sodium caseinate has good emulsification, thickening and gluing properties, it is widely used in meat products such as sausages, ham, and luncheon meat. It can increase the binding force and water holding capacity of the meat, and make the fat emulsify without precipitation, thereby greatly improving the quality of the product. It is reported that when 2% sodium caseinate is added, the water holding capacity of the meat product can be increased by 37% compared to the control. Based on this, not only can it be used in production to produce high-quality products, but at the same time it can increase the utilization rate of raw materials, increase output, and reduce costs when necessary. For example, in the production of canned luncheon meat, it is made by pre-preparing sodium caseinate, fatty meat (fat) and water in the ratio of 1:6:6 or 1:8:8, and then adding it to the meat. The product can not only maintain good sensory quality, but also greatly increase output and reduce cost.

Sodium caseinate is often used in bakery foods. In addition to using its good emulsifying properties to improve product quality and extend shelf life, from a nutritional point of view, because sodium caseinate is rich in lysine, it can greatly supplement grain protein The lack of lysine improves the nutritional value of bakery products. In order to obtain better results in specific applications, sodium caseinate is often used in combination with some other emulsifiers, or further formed into specific formulas for application. For example, there are patents in Japan: water (100 parts), sodium caseinate (5.0 parts), sodium citrate (0.1 parts), lactose (7.0 parts), palm oil (80 parts), fatty acid monoglycerides ( 7.5 parts) and diacetyl tartaric acid monoglyceride (0.4 parts) form an emulsion formula, which is added to flour in an amount of 5%. The resulting bakery product has a good texture after cooling, and its shelf life can be extended to 1 It can be used for microwave cooking.

Sodium caseinate itself can be considered as a dairy product, and its application to dairy products can further improve the quality of the product.

A soft, delicate mouthfeel and good expansion rate are very important for high-quality ice cream. During production, in order to improve the taste and texture of ice cream and avoid roughness and instability caused by low milk solid content, it is usually necessary to add milk powder, condensed milk, etc. to increase the protein content. However, the protein content in these substances is not high, while the lactose content is high (for example, the protein content of milk powder is about 28%, while the lactose is about 36%). If you add more, because the solubility of lactose is not high, the mixture will crystallize when the finished product is stored after freezing and stirring. The ice cream has a rough texture and even has a sandy texture. If sodium caseinate is appropriately added, the high protein content (about 90%) and good foaming can help improve the texture of ice cream and increase the foaming. Properties and expansion rate, and then through the emulsification effect of sodium caseinate itself and the synergistic effect of using it with other emulsifiers, the product quality can be greatly improved.

In the production of milk solid beverages, problems such as protein content lower than the national standard 8% (usually 5% to 7%) and product specific volume are usually prone to occur. If more cream or condensed milk is added, it is not ideal. At this time, if casein is appropriately added Sodium can solve the problem better.

In addition, sodium caseinate can also be used in soups, soups, snacks, and marinades to increase its viscosity and improve taste; used in beverages, especially vegetable protein beverages, to prevent fat precipitation, improve stability, and maintain beverages And clarification of fruit wine.

While vigorously developing convenience foods and fast foods, how to prevent environmental pollution caused by plastic packaging is a matter of concern. The development of edible film came into being. A good edible film should be able to effectively control the transfer of water vapor, oxygen, carbon dioxide, lipids, etc. in the food system, and prevent the volatilization of flavor compounds.

As a natural food, sodium caseinate is a food additive that is rich in nutrition and has a variety of functional properties. Today, it has received increasing attention and is widely used in the food industry. 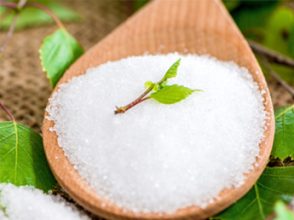 Application of Erythritol in the Food Industry Sep 24, 2020